A Christmas Carol on Marriage

There is a lot of hand wringing (particularly in Christian circles) over why young men today aren't marrying. The answer can be found in the classic A Christmas Carol, which contains a clear example of why men used to marry.


Bob Cratchit is Ebenezer Scrooge's bookkeeper. Early in the story, he is portrayed as the most miserable of men. He makes little money, and works long hours for a grueling boss who takes umberage at Cratchit putting even an extra piece of coal on the fire to keep warm. Year after year, working the same grinding job. Why would Bob Cratchit endure such a life?

Later we find out why. Bob Cratchit has a wife and six children. He has created around himself a warm and loving family. Even though his possessions are meager and he obviously has many problems with no answers, Bob Cratchit is transformed from a pitiful character to the luckiest man in the story, because he is the patriarch of a family. 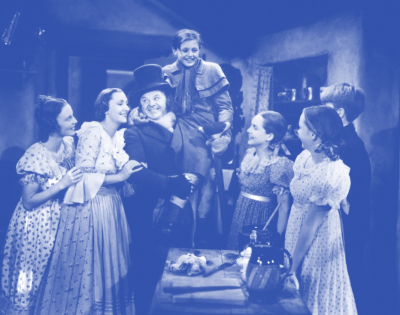 This is why men used to marry. To form a family. To have a loving wife. To be surrounded by their children. To raise them. To see them marry and have children of their own. To be remembered by two (maybe three) generations as the patriarch of a family (and then to be forgotten in the winds of time). That's why men married, and why men like Bob Cratchit willingly sacrificed their lives to slave away in misery to provide for their family.

These men knew what they were trading for a family: freedom. Even in Cratchit's day men had options (there was literally a new world to be explored). While the life of someone like Ernest Hemingway (writer, reporter, soldier of fortune, world traveler, plane crash survivor, resident of exotic locales) was unfocused and self centered he also lived life to the fullest—and on his own terms.

Men willingly gave up the chance to live life on their own terms and dedicated themselves to a life of drudgery in return for building a family around themselves. There was even a phrase for this: the patriarchy. Yes, I know the patriarchy is dead as a doornail, but what then is a man's motivation for getting married today in this environment?

When Rachel Jackson (President Andrew Jackson's wife) divorced her first husband prior to marrying Jackson (around 1800), it required a bill to be passed by the Kentucky state legislature. That's how rare divorce was. A man entering marriage was assured that both the state and the church were biased towards maintaining a marriage. That's no longer the case. Modern society has gone out of its way to remove any obstacles to divorce.

One in five modern marriages (20%) end up as sexless marriages.

A sexless marriage is a sad, cold marriage. In the past, the Biblical admonition that a husband and wife should not deny each other sex (1 Corinthians 7:5) was taken seriously. Not so today. There are even some Christian ministries (Christian in name at least) that advise wives to use sex as a means to keep their husbands in line.

I could go on about the risks involved in modern marriage, but it really only takes these two examples to make the point:


When a man marries, the majority of the time the marriage ends up as a disaster for the man.

The patriarchy is dead. Gone forever. We got it. Men no longer get the rewards Bob Cratchit got for his sacrifices: children, a respectful and loving wife, and the assurance that the marriage will last a lifetime. But given that, what exactly does a modern man get in return taking the risk on marriage and for the things he gives up when he enters marriage? Really, specifically...what?
Posted by 8to12 at 8:53 AM

Email ThisBlogThis!Share to TwitterShare to FacebookShare to Pinterest
Labels: Best Of, Marriage, Red-Pill