Is the Cube Farm the Meaning of Life? 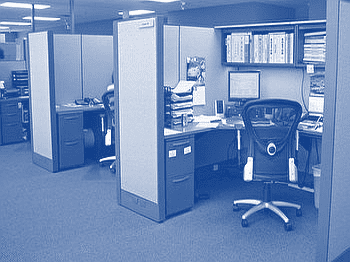 I read an article describing a woman who was raising her daughter to be a mother—to marry young to a good man, have children, and spend her life raising her children.1 The criticism of her was blistering. One theme continually popped up in comments: how can you waste your daughter's potential?

Potential? Potential to be what, exactly? A doctor, lawyer, or CEO; one of life's movers and shakers. There are a couple of problems with that attitude. For one, those types of careers are few and far between. Secondly, for most people (man or woman) the meaning of life won't be found on the job—it will be found at home in their families and in God.

It's curious that we rhetorically talk about young women becoming professionals, when so few of those jobs are available. In the USA, only 2 people in 1000 are doctors; only 4 in 1000 are lawyers; only 7 in 1000 are CEO's of a company. The likely careers for women are very different.

A career is much more likely to end up as a boring office, sales, or manual labor job than as some elite professional job. 90% of people will not end up in the top 10%.

Even if they do land a top tier job, there's no guarantee it will be the be-all-end-all of their life. Occupational burnout3 has become common, because so called top tier jobs are stressful, pressure filled, and time consuming. Plus, there's no guarantee you'll get to keep it once you land it. Lay offs are now common. A career truly is a “here today, gone tomorrow” proposition in the modern world.

Perhaps we should quit telling young women the meaning of life can be found in a career and instead point them to where lasting meaning can be found: in family and God.


For no one can lay any other foundation than that which has been laid, which is Jesus Christ. But if anyone builds on the foundation with gold, silver, costly stones, wood, hay, or stubble; each man’s work will be revealed. For the Day will declare it, because it is revealed in fire; and the fire itself will test what sort of work each man’s work is. If any man’s work remains which he built on it, he will receive a reward. If any man’s work is burned, he will suffer loss, but he himself will be saved, but as through fire. (1Co 3:11-15 WEB)

Behold, children are a heritage of Yahweh. The fruit of the womb is his reward. As arrows in the hand of a mighty man, so are the children of youth. Happy is the man who has his quiver full of them. (Ps 127:3-4 WEB)

Adam wasn’t deceived, but the woman, being deceived, has fallen into disobedience; but she will be saved through her childbearing, if they continue in faith, love, and sanctification with sobriety. (1Ti 2:14-15 WEB)

Am I saying getting married and having children is the only way to live your life? Far from it. Even the Bible bluntly says marriage is optional for Christians.3 But, the drumbeat from modern society that life's meaning can be found in work is inaccurate. It's bad enough that this has been the mantra for men in the industrial age, but to have extended this mantra to women in the last few decades has been, to be blunt, ludicrous.


Out, out, brief candle! Life's but a walking shadow, a poor player that struts and frets his hour upon the stage and is heard no more. It is a tale told by an idiot, full of sound and fury, signifying nothing. - William Shakespeare, Macbeth

How many women, as they are being escorted out the door of a company after being laid off, are thinking “I gave up the chance to have children, a husband, a family for...this!” We seem to have arranged modern society to ensure the lives of women are meaningless. Deliberately undermining any dreams of becoming mothers and replacing them with a “sound and fury, signifying nothing.”