Who is Discouraging Women From STEM Careers?

I was reading an article at Matt Walsh's blog1 where he pointed out that women don't have it worse than men. One of the comments2 caught my eye:


However, one thing about the .77 dollar argument that bears investigation is why women are underrepresented in the STEM professions, which tend to be the highest-paying professions. Studies have consistently revealed that girls are discouraged in math and science classrooms.

Having worked in a STEM field (computer programming) for over a quarter of a century, I found the idea that girls are discouraged from entering STEM fields to be curious. It certainly didn't line up with my experience in the industry. Schools have been pushing girls into math and science, not discouraging them. In my experience technology companies have been bending over backwards and jumping through hoops to get more women into IT (information technology). From programs aimed at getting high school students involved in technology to hiring decisions, there has always been a blunt, out-in-the-open emphasis on getting more women into IT.

So, if it's not “the patriarchy” pushing women down and denying them a chance to enter technology fields, what does account for women being underrepresented in technology fields? After a little research into personality types and career fields, I think I found the answer. 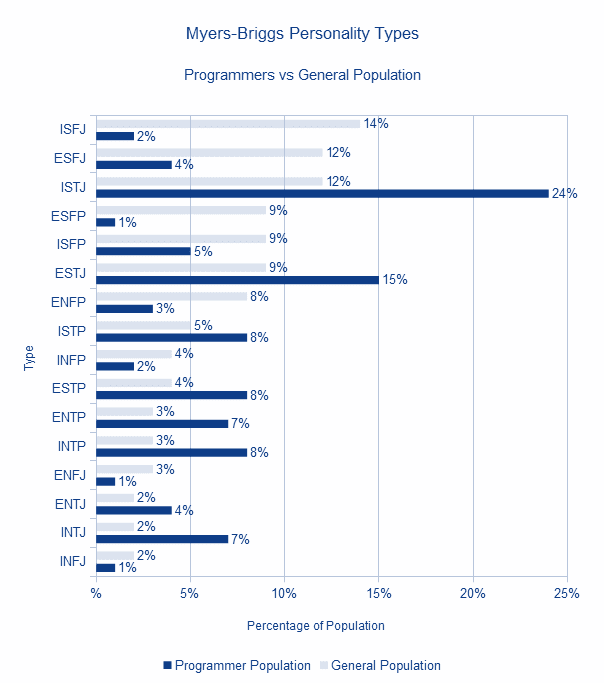 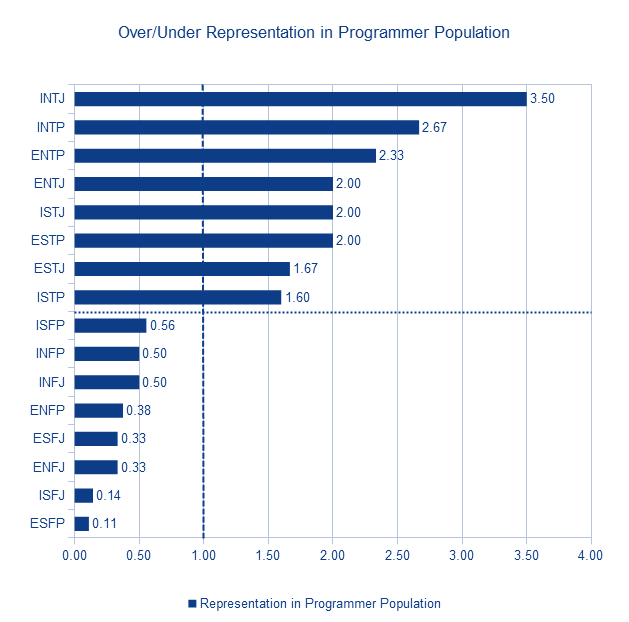 Notice the pattern (I drew a horizontal dotted line to emphasize it)? Every overrepresented personality type has a T in the third position, and every underrepresented personality type has a F in the third position. According to Myers-Briggs, this is the indicator for decision making. T stands for thinking and means when making decisions you will first look at logic and consistency. F stands for feeling and means when making decisions you first look at people and special circumstances.

T decision makers have a bent towards programming, F decision makers do not. The association is so strong, that 81% of programmers have a T personality type, despite the fact that only 40% of the general population does.

Breaking down the decision makers personality type (T or F) by gender5 explains why women are underrepresented among programmers. 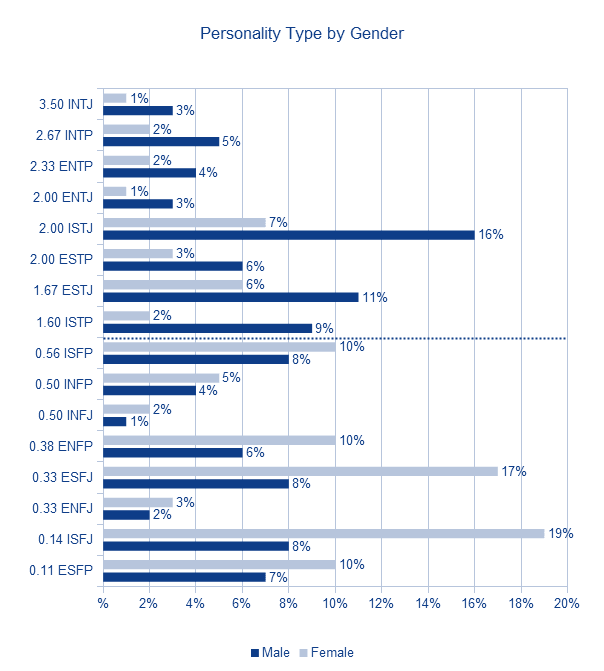 
Percentage of men and women with T personality attribute:

If STEM jobs were filled based solely on personality type, they would be 70% male and 30% female. Unfortunately, 30% is probably the ceiling for female software engineers. Unless you would enjoy doing math problems all day with minimal human interaction, then you are not cut out to be a programmer. Personality matters when it comes to STEM.


Read part 2: Who is Discouraging Women From STEM Careers? Part 2 - Stay at Homes

Email ThisBlogThis!Share to TwitterShare to FacebookShare to Pinterest
Labels: Best Of, Red-Pill