When people discuss the difficulties of women over 30 having a child, the focus is always on fertility rates—how easy (or hard) it is for a woman to actually get pregnant. That's only part of the story. You also have to consider the ability of a woman to carry the child to term. The chart below shows the miscarriage rates for women by age1. 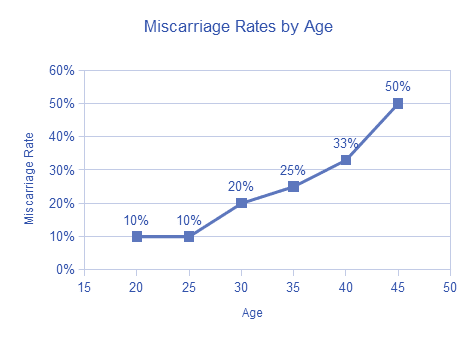 If a thirty year old woman gets pregnant, there is a 1 in 5 chance she will miscarry; at thirty five it's 1 in 4; at forty it's 1 in 3. These are the hard numbers, and it is part of the reason the average number of children per American family has been shrinking—now down to about 2.

But, that average includes women of all ages who had children (even the ones that started in their teen years). How does the higher miscarriage rates of older women affect their ability to have even the average number of children (2)? They are stacked against her. So stacked that the term “secondary infertility” (the inability to have a second child) has entered the lexicon.

One of the primary reasons to get married is to have children and form a family. If that's your goal, then your potential bride's ability to have children (including the number of children you desire) is important. No it's not romantic, but marriage is more than just romance.

To put the shoe on the other foot, if a woman found out her fiancee (who she was madly in love with) had undergone a vasectomy and thus was unable to father children, would she be justified in breaking off the engagement and looking for another man to marry? Yes she would, because having children is important to both men and women.

The fact that a woman has put off motherhood until the riskiest time in her life to have a child (her 30's) doesn't mean you have to blindly join her in her risky behavior. Make and intelligent choice about marriage, and part of that choice involves decisions about children.